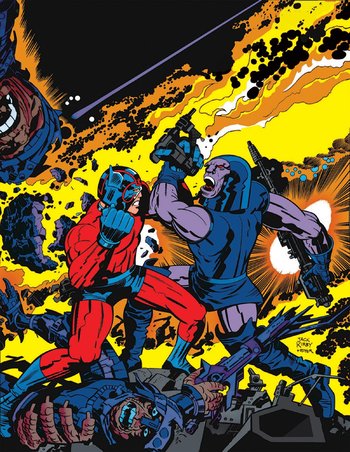 An Epic for Our Times!
"There came a time when the Old Gods died! The brave died with the cunning! The noble perished, locked in battle with the unleashed evil! It was the last day for them! An ancient era was passing in fiery holocaust! The final moment came with the fatal release of the indescribable power — which tore the home of the Old Gods asunder — split it in great halves — and filled the universe with the blinding death-flash of its destruction! In the end there were two giant molten bodies, spinning slow and barren — clean of all that had gone before — adrift in the fading sounds of cosmic thunder... Silence closed upon what had happened — a long, deep silence — wrapped in massive darkness... it was this way for an age... THEN—THERE WAS NEW LIGHT!"
— The epilogue at the beginning of the first issue of New Gods
Advertisement:

Jack Kirby's meta-series where he developed an entire cosmic mythology involving the New Gods of the utopia of New Genesis and the dystopia of Apokolips. Collectively, they were called The Fourth World.

New Genesis and Apokolips were once one planet, but were split apart during the Old Gods' Ragnarok. New Genesis is ruled by the benevolent Highfather, while Apokolips is kept in the rocky fist of Darkseid. Before the beginning of the series, there was "The Pact," where to keep the peace between Apokolips and New Genesis, Highfather and Darkseid trade sons. Darkseid's son, Orion (the one on the left in the page image), grows up to wield the "Astro-Force" and knows that he is destined to kill Darkseid in battle. Darkseid, in turn, raises Scott Free, who rebels against him and becomes Mister Miracle (and ends up marrying Big Barda, a reformed former member of Darkseid's Female Furies).

Other characters on New Genesis include: Lightray, Orion's cheerful and optimistic friend; Forager, one of the evolved bug people of New Genesisnote who is secretly a New God himself in disguise; and the Forever People, essentially hippies FROM SPACE.

Other characters on Apokolips include: Desaad, Darkseid's chief Torture Technician and dirty old man; Granny Goodness, who specializes in brainwashing people and having the evil Female Furies; Kalibak, Darkseid's other son and second-in-command; and Parademons.

Then there are Metron, a neutral figure if there ever was one, and the Black Racer, Death on skis.

Other concepts of note include the Source, an ancient metaphysical energy-thingy that's connected to the Source Wall; Mother Boxes, living magical computers that some of the New Gods have; Boom Tubes, teleportation tunnels by which the New Gods travel through space in a degree of minutes; and the Anti-Life Equation, which Darkseid is forever seeking.

The original Fourth World books were:

It may be also important to note that the New Gods was abruptly canceled before Kirby could finish it, in part because only Mister Miracle caught on with readers (and even then got canceled several issues later). The New Gods and Mr Miracle were revived in the late '70s by DC, minus Kirby's involvement, and continued the original numbering but were cancelled in the "Great DC Implosion", with New Gods' last issues being published in "Adventure Comics" (as well as an arc on "Justice League of America" designed to bring Darkseid back).

Kirby was brought back to give his own official ending to the franchise, as part of a deluxe format reprinting of the eleven issues of New Gods that Kirby produced, but the whole thing fell apart due to editorial interference (Kirby was forbidden from killing Darkseid and Orion off... maybe, some sources say otherwise). What ultimately came about was a new story called "Even Gods Must Die", which was a lead-in to the graphic novel "The Hunger Dogs", which suffered extensive executive meddling but offered a semi-decent ending to the series as Kirby (per DC's demands) ended his story with Darkseid overthrown by his slaves.

Later writers revived the characters and concepts, though with a great deal of decay in concept as only Darkseid and Mister Miracle caught on with fans (with Orion and Big Barda tagging along). These stories included the original 1970's Secret Society of Super-Villains, The Great Darkness Saga, Rock of Ages, Legends, Cosmic Odyssey, Genesis, Seven Soldiers, The Death of the New Gods, Countdown to Final Crisis, and finally Final Crisis, which slammed the door on the New Gods once and for all, while giving Darkseid a hell of a send-off as the Villain Decay got shrugged off of him on his way out the door. However, after the New 52, they were all (presumably) brought back to life thanks to Cosmic Retcon. Darkseid serves as, of all things, the Starter Villain for the Justice League, and his invasion of Earth is what leads to their formation. Fittingly, he also served as the final villain of that particular Justice League run, in the "Darkseid War" story arc.

Before that though, when Kenner Toys had the Super Powers toyline in the 1980s, they used a number of Kirby's New Gods characters as action figures and Kirby finally got some sort of a direct payoff for his creativity. He also contributed to the tie-in comic, and it even seems roughly in continuity with his original stories.

Some of the characters (Orion, Scott Free, Big Barda) were brought in for the Kingdom Come story (after all, who wasn't?).

Mister Miracle, Barda, Oberon, Lightray, and Orion have all served in the Justice League of America at various times.

Because Jimmy Olsen was one of the original Fourth World books, and Superman guest stars in the first issue of The Forever People, the whole New Gods saga has had close ties to Superman since the beginning, and the 1990's Superman: The Animated Series firmly cemented the two mythoi together. These days, Darkseid tends to be depicted fighting Superman and/or the Justice League more often than he is shown fighting Orion.

Characters from the Fourth World have been featured in several DC adaptations; usually those involving Superman.