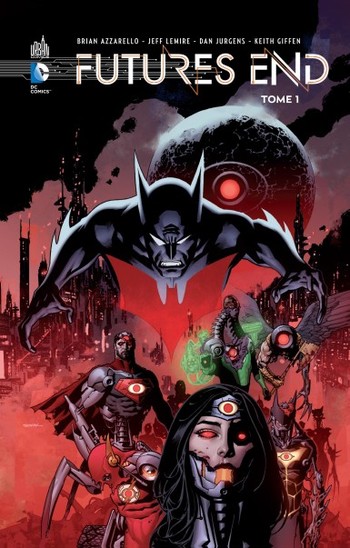 To satisfy your John Stewart with two spines cravings.
Advertisement:

A weekly comic series published by DC Comics that ran from 2014-15.

Thirty-odd years into the future, and Brother Eye and its relentless army of OMACs have taken over the entire world. The few superheroes left are being hunted down and turned by the satellite, one-by-one. But Batman has a plan: he's going to prevent this nightmare world from ever happening, by time-traveling to before Brother Eye began its conquest. However, due to events going out of control, his protégée Terry McGinnis has to take up the task instead.

He ends up a few years out, in a world already damaged by disaster, on the brink of collapse, but he's still determined to finish his mission. However, is it already too late?

During September 2014, several DC titles had Futures End one-shots. In addition to glimpses of the future this series presented, these one-shots also allowed for writers to write pseudo-epilogues to their respective series.

Another series, Earth 2: World's End, showed the fate of Earth 2, which features heavily in the backstory for this series.

The series also resulted in a Batman Beyond spinoff, following the aftermath of its events.

Please note: the title of this comic/crossover is "Futures End" (no apostrophe) and not "Future's End." There was even a tagline of "When Futures End... Blood Moon Shall Rise!"

This series (and the accompanying tie-ins) contains examples of: