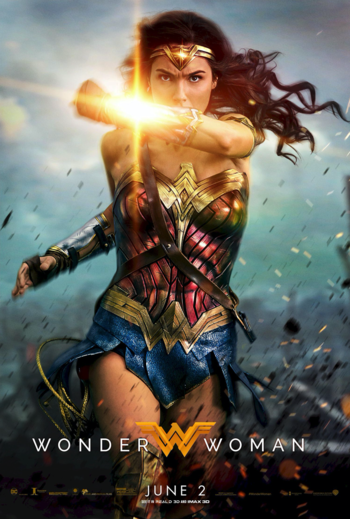 "If no one else will defend the world, then I must!"
"I used to want to save the world. This beautiful place. But I knew so little then. It is a land of beauty and wonder, worth cherishing in every way. But the closer you get, the more you see the great darkness simmering within. And mankind? Mankind is another story altogether."
— Diana of Themyscira
Advertisement:

Wonder Woman is a 2017 film starring the world's first popularized superheroine, DC Comics' Wonder Woman. The movie is directed by Patty Jenkins and is the fourth film in the DC Extended Universe.

The film revolves around the first venture of Diana of Themyscira / Wonder Woman (Gal Gadot) into the human world, as she recalls her memories in modern day following the events of Batman v Superman: Dawn of Justice. In 1918, after the mythical Amazons have refused to take action in the affairs of mankind for thousands of years, Diana resolves to leave her island home of Themyscira in order to help bring an end to one of the most destructive wars in humanity's history, and follows Captain Steve Trevor (Chris Pine) in Europe.

The Comic-Con Teaser can be viewed here

, which was cut down to become the first official trailer. The second trailer can be viewed here

A sequel, Wonder Woman 1984, was released in December 2020. A third film has also been confirmed

Not to be confused with the 2009 Wonder Woman animated film.

open/close all folders
Tropes A to F
Tropes G to L
Tropes M to R
Advertisement:
Tropes S to Z
"I used to want to save the world. To end war and bring peace to mankind. But then I glimpsed the darkness that lives within their light. And learned that inside of every one of them, there will always be both. A choice each must make for themselves. Something no hero will ever defeat. And now I know. That only love can truly save the world. So I stay. I fight and I give. For the world I know can be. This is my mission now. Forever."
Feedback