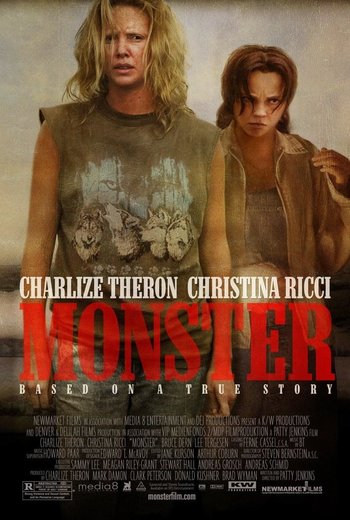 Monster (2003) is a biographical crime drama about serial killer Aileen Wuornos, a former prostitute who was executed in 2002 for killing seven men in the late 1980s and early 1990s. Wuornos was played by Charlize Theron, and her lover, Selby Wall, was played by Christina Ricci (Wuornos' lover's name was actually Tyria Moore, but her character's name, age, and appearance in the film were changed for legal reasons). The film was written and directed by Patty Jenkins.

This movie has no connection with the anime and manga Monster (though that work does focus on a serial killer just like the film), the young adult novel Monster and it's 2021 adaptation, the sci-fi film Monsters, the 1925 film The Monster, the 1999 film Monster! (1999), or the 2016 film The Monster.