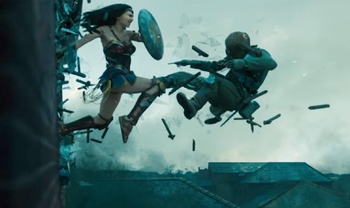 Diana and the crew liberate the town of Veld. Those sequences of Wonder Woman plowing her way through everything German soldiers throw at her are easily on par with or even surpass Batman's warehouse fight scene. Using the momentum from an explosive that blew up near her as a stepping stone, Diana leaps through the window of a stronghold of the Germans like a battering ram, and it's here where her theme from Batman v. Superman: Dawn of Justice really kicks into muscular, cello-wailing overdrive. She beats the living crap out of said soldiers using her sword, shield, and martial skills in general.