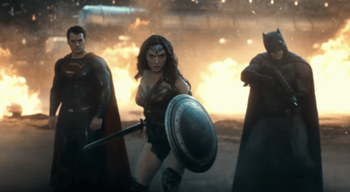 "I've killed things from other worlds before!"

"My parents taught me a different lesson, dying in the gutter for no reason at all. They taught me the world only makes sense if you force it to."
— Batman lets Superman know why he's inferior.
Advertisement: