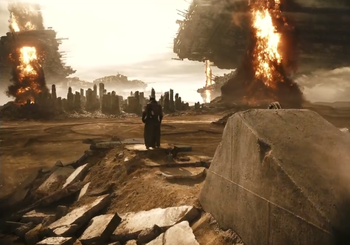 "He's hungry! He's found us! And HE'S COMING!"
"That son of a bitch brought the war to us, two years ago. Jesus, Alfred. Count the dead. Thousands of people. What's next? Millions? He has the power to wipe out the entire human race. And if we believe there is even a one-percent chance that he is our enemy, we have to take it as an absolute certainty!"
— Bruce Wayne
Advertisement:

Batman v Superman: Dawn of Justice not only shows the downsides of humanity, but also goes deeper into alien terrors like its predecessor. All of this adds up to a cocktail of nightmares that will haunt you in your sleep.