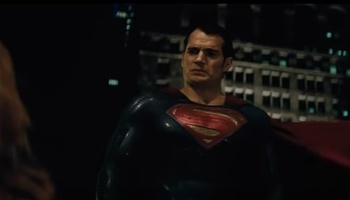 "No one stays good in this world..."
"All this time. I've been living my life the way my father saw it. Righting wrongs for a ghost. Thinking I'm here to do good. Superman was never real. Just the dream of a farmer from Kansas."
— Superman
Advertisement:

What do a hope-filled reporter, a brutal crime-fighter and a retired fighter have in common? They all carry an unnatural load of angst, as Batman v Superman: Dawn of Justice can demonstrate.