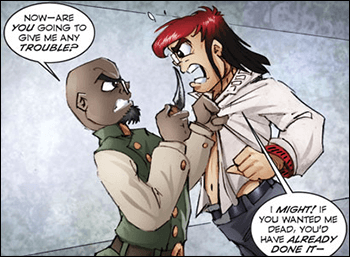 Line uttered to "prove" temporary lack of hostile intentions. You can usually accept this line to be true whenever it is spoken; (almost) nobody ever bluffs a failed assassination attempt this way.

It might come up when a villain who was secretly spying on the heroes or even hiding among their ranks suddenly offers them help, as they happened to have a common goal. Can be made more persuasive by specifying a specific recent opportunity to kill the person being reassured in this manner. A common inversion is to have the person being threatened calmly shake the threat off with the reasoning, "If you were really going to kill me you'd have done it by now." Another common variation is a known assassin or otherwise unscrupulous person who is accused of an assassination, and points out if they had done it, they wouldn't have been caught.

The villain can also claim that it's Not Me This Time.

Not to be confused with I Wished You Were Dead. Compare Break-In Threat.

Alastor is a monster and absurdly powerful, so if he wanted to hurt Charlie or the Hotel, he would have done it by now.

Alastor is a monster and absurdly powerful, so if he wanted to hurt Charlie or the Hotel, he would have done it by now.