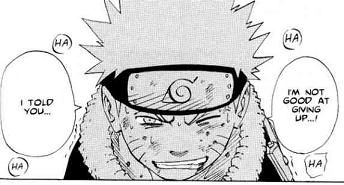 "Even if you get hacked up once or twice, when you're a badass you live through it to fight again."
— Date Masamune, Sengoku Basara: The Last Party
Advertisement:

The Hero is battered and bruised; they can't keep up with the enemy. Then the villain picks up a child, spouse or similar loved one and draws back their weapon for the killing blow — and suddenly the hero is able to ignore their wounds and charges their enemy, attacking with a flurry of furious blows that utterly overwhelms their opponent. Bonus points if given in conjunction with a "No More Holding Back" Speech.

Heroic Resolve is a variant of Heroic Spirit that is specifically in response to a threat against something or someone that the hero cares deeply about, gaining his new power purely from guts and the desire to protect.

If the character is only in any way competent in this kind of situation, you're dealing with either Let's Get Dangerous! or a Crouching Moron, Hidden Badass scenario. It may also come from the last straw in a campaign to Break the Cutie being reached, thus providing an example to the bad guys of why they should Beware the Nice Ones.

Note to well-meaning but Genre Blind friends and allies: do not try this intentionally. If The Virus is involved, then it's likely a case of Heroic Willpower. And to anyone holding the Villain Ball: never force a hero to watch a loved one in pain; this is one of the most common triggers of Heroic Resolve and a leading cause of villain death.

A Sub-Trope of Heroic Spirit. This trope is a staple of shonen anime and other stories involving Japanese Spirit. It is also quite prevalent among action movies.

Bottled Heroic Resolve is when the will is strong enough, but the body too weak, and so the hero uses drugs of some kind.

Compare with the Determinator and Heroic Second Wind. The Fettered can pull this off when their ideals are threatened. Hope Spot is the subversion, when that last burst still isn't enough.