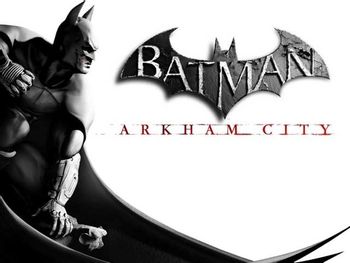 Arkham has moved.
"How does it feel, Wayne, to stand on the very stones that ran with your parents' blood? Do you feel sad? Full of rage? Or does that outfit help bury your feelings; hiding your true self? Oh, you are a truly extraordinary specimen... I look forward to breaking you."
— Hugo Strange
Advertisement:

The game takes place eighteen months after the events of Arkham Asylum; Quincy Sharp is now Gotham's mayor, having won the election after taking credit for stopping Joker's assault on Arkham. With Arkham Asylum and Blackgate Penitentiary both closed due to the events of the previous installment, Sharp has arranged for all of Gotham's inmates to be moved to Arkham City, an open-air prison built around the slums of Gotham City. Which doesn't sound too bad until you realize that anyone with even the slightest record is thrown in. Which means tax-dodgers and petty burglars are in there with crime bosses, serial killers and lunatics.

Many of Batman's arch-foes are among the incarcerated, returning from Arkham Asylum or being newly introduced as characters within the series.

Psychiatrist Professor Hugo Strange is brought on to oversee the prison. In a complicated series of events, Bruce Wayne gets taken into the city, learning that Strange knows the identity of Batman and has a mysterious plan in motion. Escaping and suiting up, Batman dives into the gangs of Arkham City to rescue Catwoman and encounter many of his Rogues Gallery, who have carved out their own territories — including The Joker, who (true to form) has some wicked plans of his own...

Kevin Conroy and Mark Hamill return from the previous game to portray the roles of Batman and The Joker respectively. Besides the characters mentioned above, Bane, Poison Ivy, Harley Quinn, Victor Zsasz, Killer Croc, and The Riddler return (with Killer Croc being relegated to a cameo appearance, while The Riddler gets a much bigger role than he had in the previous game and is given a physical appearance this time around); newcomers to the series include Robin, Catwoman, Two-Face, The Penguin, Deadshot, the League of Assassins, Mr. Freeze, Hush, Mad Hatter, Calendar Man, Solomon Grundy, and Black Mask.

The combat includes more options and integrated gadgets, there are more enemy types, detective mode involves more forensic deduction, the Riddler Challenges involve more varieties of puzzles, the battles are more expansive and the environments are much larger — but the story is still in a confined setting so that there is a focus to the game and doesn't require you to wander around aimlessly.

In addition to all of the above, there are more challenge game types with loads of new features. Catwoman is playable with a complimentary campaign mission, she is also available as a character to play in the challenge missions along with Robin and Nightwing.

The game became known for an unprecedented number of cinematic trailers outlining the different features. A Primary Trailer,

An Updated Re-release called Batman: Arkham City Armored Edition was created for the Wii U. It features unique controls specially patented for that system. All DLC for the original release are featured in the game, and Catwoman's role as a character is expanded upon. Furthermore, Batman and Catwoman also sport armored costumes (justifying the game's strength-boosting "Battle Armored Tech" mode), optional touchscreen and motion controls for Batman's gadgets, and a sonar to reveal nearby villains and Riddler trophies.

The game also has several pieces of tie-in media:

Has a Character Sheet that includes the previous game.

Hugo Strange blames Batman for the rampant crime and corruption in Gotham City.

Hugo Strange blames Batman for the rampant crime and corruption in Gotham City.