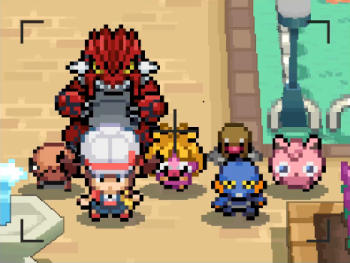 Welcome back to Random.
"No Mon. No Kings. Only Gods."
- Tagline for the game, as a Call-Back to the tagline of Twitch Plays Pokémon Crystal.
Advertisement:

As the sixth installment of the franchise, Twitch Plays Pokémon HeartGold is a return to the Johto Region, but it continues the randomization trend previously seen in Twitch Plays Pokémon FireRed. As the original game was a remake of the Gold and Silver duology (With Crystal plot points included for good measure), expect there to be changes to the plotline.

The run ended at 18d 20h 33m with the defeat of a hacked-in Alice, and the stream continued a few days later with Twitch Plays Pokémon Black.