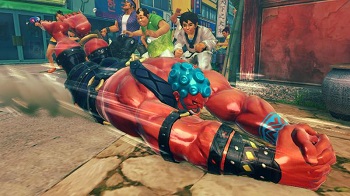 Not just for kicks.
Advertisement:

Primarily used to trip enemies, duck under attacks or traverse low obstacles, this involves a character being able to slide quickly along the ground to strike low, almost like a baseball-player sliding into home plate. This will commonly show up in the form of a kick, as it's most often done foot-first, however some characters have been known to slide on their belly. Cases where the user appears to hover across the ground fall under Artistic License.

Since this technique is hardly considered a conventional method of attack, those utilizing it can be expected to be a Combat Pragmatist, Fighting Clown or have some elements of Confusion Fu in their style.

Not to be confused with the cryptanalysis term