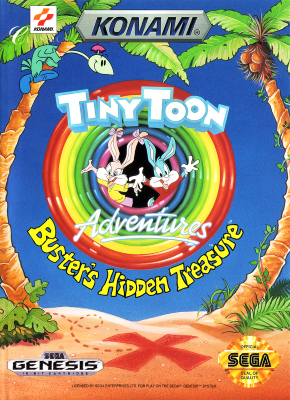 A Tiny Toon Adventures Licensed Game by Konami, for the Sega Genesis.

While cleaning up a warehouse in ACME Looniversity, Buster Bunny comes across a treasure map. Montana Max, being his usual greedy self, yanks the map right out of Buster's paws and declares that he will be taking the treasure for himself.

To that end, he has Dr. Gene Splicer develop a mind-control helmet, which he uses to brainwash Dizzy Devil, Calamity Coyote, Hamton J. Pig, and Plucky Duck into helping him search for the treasure (and incidentally serve as a Boss Battle when Buster comes across them), and has Elmyra Duff kidnap Babs Bunny, Fifi la Fume, and Shirley McLoon in an attempt to keep Buster off the trail.

In response, Buster simply recruits Gogo Dodo, Concord Condor, Li'l Sneezer, and Little Beeper to help him find the treasure, save his friends, and teach Max a lesson.