Literature / The Stone Dance of the Chameleon 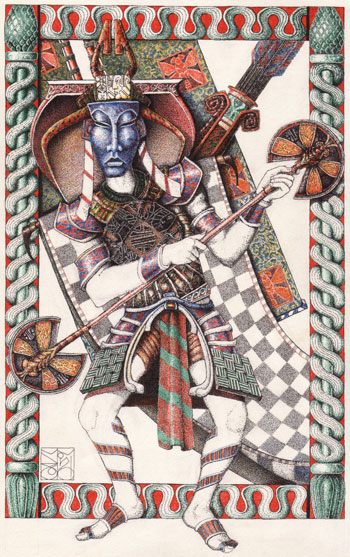 This drawing by the author became the genesis of the story.
Thrust forth the Green Child
Ten thousand times reborn
Squeeze Him into the air
Enjewelled by the morning
To take sweet nurture
At Your breasts
That He might dance again
And once more blow His scents
Beneath the skies.
— The Song to the Earth
Advertisement:

The Stone Dance of the Chameleon is a Low Fantasy trilogy by Ricardo Pinto. It is notable for being extremely dark and featuring no magic at all.

Cruel and oppressive, the Masters rule over the three lands; a race of tall, pale people who believe the blood of gods runs in their veins. Carnelian is a Master but, having grown up in exile, he has the unusual trait of mercy. When his father is called back to the capitol Osrakum to oversee the election of a new God-Emperor, he finds himself plunged into a web of intrigue and deceit.

The Stone Dance of the Chameleon consists of the following books:

In August of 2018, the author announced the upcoming release

rather than three longer ones: