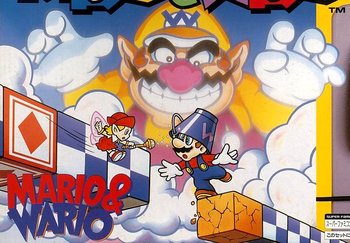 Note the inverse ratio of character size to presence in the actual game. In other words, Wario hardly appears in this game at all.
A game with MARIO
wearing a bucket
on his head!
— Copycat's SNES in Pokémon Red and Blue
Advertisement:

Mario & Wario is a 1993 Puzzle Platformer video game exclusively for the Super Famicom developed by Game Freak. Yes, that Game Freak, designed by Satoshi Tajiri himself. It is one of few Mario games they made, before the birth of the Pokémon franchise, and one of very few games that utilized the system's mouse accessory.

One day, Mario, Luigi, Peach and Yoshi came to the Fairy's Forest in search of its fabled fairy of fortune, but Luigi got lost, causing the other three to get separated. Suddenly, a bucket landed on Mario's head, blocking his eyesight — the perpetrator was Wario, up high and out of reach in his personal plane, the Bulldog. The elusive fairy, Wanda, witnessed this crooked event and vowed to somehow reunite Mario and co. with Luigi. What she (and apparently everyone except Luigi) lacks in upper body strength, she more than makes up for with her Magic Wand!

Not to be confused with the Nintendo Power comic, Mario vs. Wario.