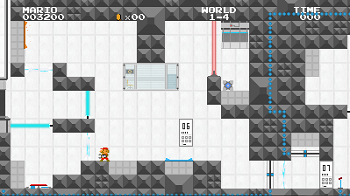 Mari0 (2012) is a fan-made crossover between Super Mario Bros. and Portal. You're Mario, and you have a portal gun. You can play through the classic levels from the original NES game (but with portals!), try and solve the Aperture Science-themed puzzles based on Portal and Portal 2, or even make your own levels. There's a Co-Op Multiplayer mode too—up to four players can play simultaneously, much like in New Super Mario Bros. Wii.

The game is available as a free download at its homepage on Stabyourself.net

. An updated version known as the Special Edition was in the works, but due to years of Development Hell, it was cancelled with only a public beta in 2014 ever being released. In early 2018, development of a sequel based on Super Mario Bros. 3 was streamed on Twitch, but with little news since then, don't hold your breath.