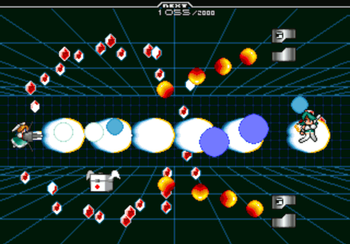 To the right is your Evil Counterpart, and the boss of the third level.
An Indie Game from 2002, Medicalat

is a three-level side-scrolling Shoot 'em Up where a space nurse and her personal Kill Sat in form of a huge syringe take on endless waves of enemies in the veins of a person to defeat The Virus who infects everything and everyone. A good game to fill pauses at work. Since the game is fairly old and therefore not compatible with PCs running Windows 10, using a Direct Draw-wrapper like DXGL is necessary to run the game at all.