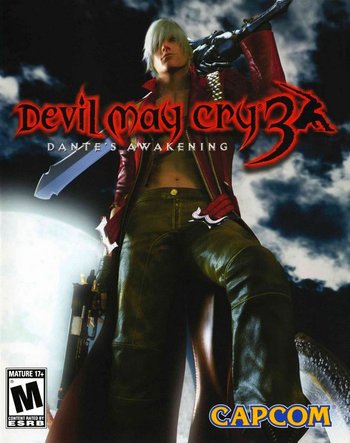 "This party's gettin' crazy! Let's rock!"
Dante: "So this is what they call a heartwarming family reunion, eh?"
Vergil: "...You got that right."
Advertisement:

Devil May Cry 3: Dante's Awakening is a Stylish Action Hack and Slash video game for the PlayStation 2, developed and published by Capcom in 2005. The game is the second Numbered Sequel in the Devil May Cry series after 2003's Devil May Cry 2.

Several years before the events of Devil May Cry and Devil May Cry 2, a young and arrogant Dante is visited by a strange man named Arkham, who informs him that Dante's brother is looking for him. A great tower named Temen-ni-gru suddenly rises out of the ground soon after, unleashing hordes of demons upon the city. Dante, always ready for a fight, sets off to conquer the tower, encountering swarms of demons, monstrous bosses, a gun-toting lady who refuses to give him her name, and the mysterious Arkham himself, all coming to a final confrontation with his estranged twin brother Vergil.

Gameplay is a more advanced form of the combat from the previous games; Dante is able to wield a great number of both melee and ranged weapons, beginning with his trusty sword Rebellion and dual pistols Ebony and Ivory, and can execute dozens of moves to stylishly eliminate enemies. He also has access to a number of Styles that allow him to focus on certain aspects of his techniques, such as evasive maneuvers, defensive maneuvers, or extra attacks with his melee and ranged weapons.

Later in 2005, Capcom announced that they would release a "Special Edition" of the game that added more features and content — most notably the ability to play as Vergil. This Special Edition was released in early 2006.

Aside from the main game, there are also supplementary materials and spin-offs for Devil May Cry 3, such as a two-volume Manga prequel published in 2005, and a 2007 pachislot machine that uses the in-game assets.

In February 2020, the game was ported over to the Nintendo Switch. However, rather than being a straight port like its predecessors, the Switch version of Devil May Cry 3 added new gameplay features under the exclusive "Freestyle" mode, like Real-Time Style Switching and the Irregular Full Custom Weapon Switching, features that wouldn't be introduced until 4 and 5, as well as the addition of Local Co-Op Bloody Palace with Dante and Vergil, a first ever for the series.