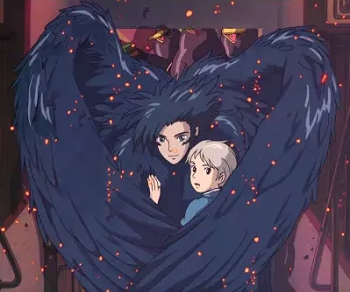 Raven wings to shield from harm
Close to his heart, safe and warm.
"Your bullets cannot harm me — my wings are like a shield of steel!"
— Batfink, Batfink
Advertisement:

Typically, we think of wings as fragile objects since they're easy to break in real life, but when it comes to combat, writers like to make them stronger than they actually are for the sake of Rule of Cool.

For example, wings are able to withstand things like explosions and lasers without breaking a single bone.

This is usually done to emphasize how powerful the character is, especially when they can deflect attacks right back at their opponent or negate them completely.

Things get a bit fussy with mechanical wings because it's usually expected that they're built to withstand damage in the first place. Yet it's also more likely for them to be destroyed because anything metal or robotic is prone to blowing up. So when a Cyborg or Mechanical Monster uses their wings to block an attack, it then acts as a tip for the audience that they're not going down anytime soon.

And because of their strength, winged characters will often use them to protect not only themselves, but also others from danger and various hazards, similar to how birds use their wings to protect their young from rain and predators in Real Life.

There are three common variations of the trope, though they're not required to be included here. Usually the wings...

When not used for self-defense, wings can also be used to comfort others or convey certain emotions, such as a Winged Humanoid using them to hide their face out of shame or embarrassment, or to provide a hug to a crying individual as if to protect them from whatever is upsetting them.

Similar to Feather Fingers, expect the wings to bend at otherwise-impossible angles in order to properly shield someone.

Subtrope of Luckily, My Shield Will Protect Me and Artistic License – Biology.