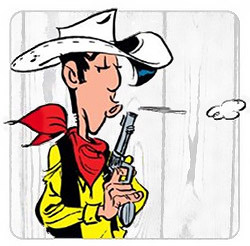 The Smoking Barrel Blowout is when a (usually successful) gunshot goes off and the shooter blows away the smoke at the tip of the barrel afterward. May be parodied with gun-like objects, such as a Finger Gun, or with objects such as blowtorches. Especially common with The Gunslingers in Western movies, as modern ammunition is less smoky.

Note: in Real Life this is very stupid. At best, you're liable to get burnt powder in your eyes. At worst, you could end up killing yourself. Just because the gun went "bang" after all, doesn't mean the bullet came out. This goes double for semi-automatic or automatic firearms, because they can chamber rounds right after firing. If you prefer living, it's best to keep guns pointed well away from your body: particularly your face. Even if you don't particularly love living, keep in mind that "accidentally shot themself" is a phrase commonly found in the bios of Darwin Award

Compare Swipe Your Blade Off. Not to be confused with Exploding Barrels.