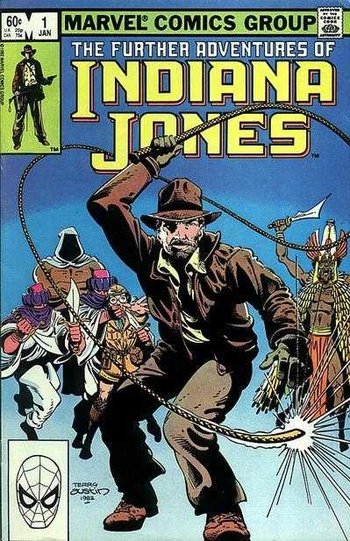 The Further Adventures of Indiana Jones is a comic book series that ran from 1983 to 1986 published by Marvel Comics.

The series was set in the time period following Raiders of the Lost Ark in 1936 with the final four issues moving into 1937. Thirty-four issues in total saw publication but at least two more were planned but didn't receive a release: "The Sentinel", and an untitled story that was scheduled to be issue 35 had the book not been canceled.

Between 2009 and 2010, Dark Horse Comics re-released the comic series alongside Marvel's adaptations of the Indiana Jones movies in three omnibus editions.

Tropes found in The Further Adventures of Indiana Jones include: