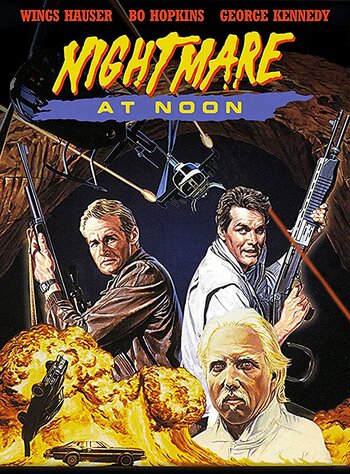 Nightmare at Noon is a 1987 low-budget horror film written and directed by Nico Mastorakis.
Advertisement:

A mad scientist (Brion James) creates a substance that turns people into mindless murderers with green blood, and uses it to infect people in a small town in Utah. Ken Griffiths (Wings Hauser) and his wife Cheri (Kimberly Beck) are tourists whose RV breaks down just outside town, leaving them stranded. They join forces with Sheriff Hanks (George Kennedy), the deputy Julia (Kimberly Ross), and former cop Reilly (Bo Hopkins) to defeat the scientist.

Nightmare at Noon contains examples of: