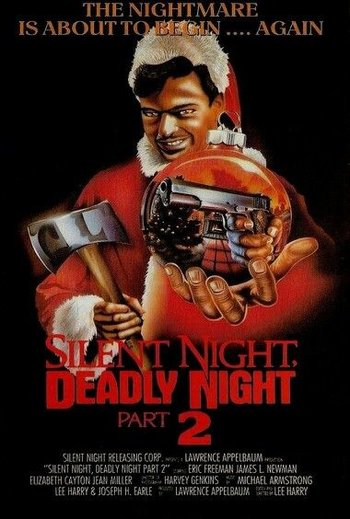 Consisting of about fifty percent flashbacks to the original film, Silent Night, Deadly Night Part 2 follows Billy's brother Richard "Ricky" Caldwell, who followed in his sibling's footsteps and grew up to be a psychotic murderer. After going on a rampage, Ricky winds up in an institution, where he tells his story to a psychiatrist named Henry Bloom. Unintentional Hilarity Ensues.

But let's face it, you're probably only here because of the Garbage Day

If Silent Night, Deadly Night 2 is remembered for anything, it's this meme-worthy line.

If Silent Night, Deadly Night 2 is remembered for anything, it's this meme-worthy line.