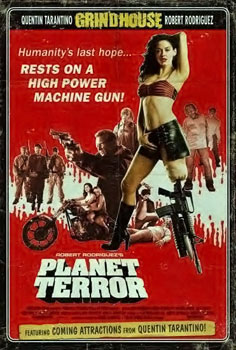 Planet Terror is the more action-oriented half of Grindhouse. A 2007 Robert Rodriguez film in which a military transaction goes awry and an experimental poison gas is released on a small town in rural Texas, turning the unsuspecting civilians into bloodthirsty zombies. The only people who can stop them are a Go-Go-Dancer with a gun for a leg, her expert gunman ex-boyfriend, a pair of crazy babysitter twins, a shellshocked doctor, a Jerkass cop, a crusty sheriff, a scientist obsessed with testicles, and many other trailer-park freaks from deep in the Heart of Texas.

Humanity's last tropes...resting on a high-power machine gun are: