Film / The People Under the Stairs 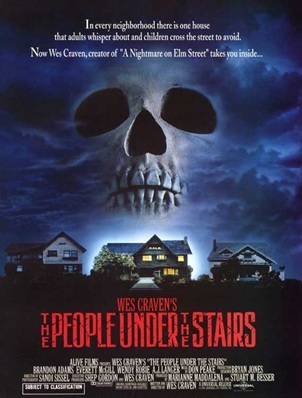 If these walls could talk, they’d scream.
Advertisement:

The People Under the Stairs is a 1991 horror comedy movie directed by Wes Craven. It's the story of a young boy, called Fool (Brandon Adams), whose family is about to be evicted from their apartment by the evil landlords, who want to develop their building once they're gone. Fool's mother is sick and needs an operation, but Fool's sister can't come up with enough money. Fool wants to be a doctor, but his family doesn't have enough money to ever send him to medical school. Fortunately, his sister's boyfriend Leroy (Ving Rhames) and his accomplice Spencer (Jeremy Roberts) have a plan to rob the landlords' house; and they need Fool's help to do it.

Breaking into the house proves to be the easy part; it's getting back out that's the problem. The house is built like a fortress, and designed to keep something in. Electrified doors, a vicious guard dog, strange creatures in the basement, and a bizarrely extensive security system prevent them from leaving before the owners return. "Mommy" (Wendy Robie) and "Daddy" (Everett McGill) are back, and they're armed and crazy. They quickly dispatch Leroy and feed him to their "sons", a pack of mutilated boys that they keep captive in the basement, and set out to hunt Fool through the house. With the help of their daughter Alice (AJ Langer) and a boy called Roach (Sean Whalen), Fool attempts to escape the house and reveal the truth to the world.

A wonderfully bizarre horror movie, The People Under the Stairs has some of the structure of a fairy tale with Fool needing to save Alice from her insane captors. Throw in some surprisingly frightening villains and some social commentary and it's a memorable, if unusual, movie. In 1992 and 1993, the movie was adapted into a haunted house at Universal Studios' Halloween Horror Nights. A sequel to this house later followed in 2006.