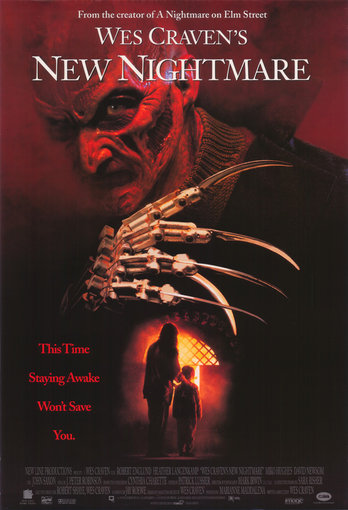 "Miss me?"
Wes Craven: I think the only way to stop him is to make another movie. Now I swear to you I'm gonna stay by this computer and keep writing until I finish the script, but... when the time comes, you're gonna have to make a choice.
Heather Langenkamp: Choice? What kind of choice?
Wes Craven: Whether or not you will be willing to play Nancy one last time.
Advertisement:

Wes Craven's New Nightmare is the seventh A Nightmare on Elm Street film, released in 1994, ten years after the original. It is the only film in the franchise besides the first to be directed by series creator and horror maestro Wes Craven.

In the real world, people behind the Elm Street films are preparing for a new installment. As this goes on, it becomes apparent that Freddy Krueger has seemingly come over the wall separating reality and fiction, and is now haunting the actress Heather Langenkamp, who played Nancy in the films.

Despite being one of the better-received Elm Street films, the film wasn't as big at the box office, garnering 16 million dollars with its 8 million budget. Its self-aware tone and deconstruction of the horror genre is considered a precursor to Scream (1996), which Craven directed two years later, though while Scream went onto become a blockbuster film and genre touchstone, New Nightmare settled for more of a cult following. 25 years later, a fan-film continuation of the movie has been announced, with Miko Hughes (who played Heather's son Dylan) returning.