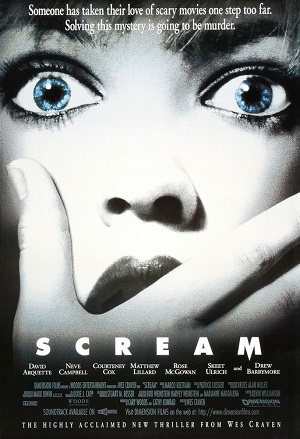 Scream is a 1996 slasher movie directed by Wes Craven, from a screenplay by Kevin Williamson. It is the first film in the Scream franchise.

In the town of Woodsboro, two teenagers are gruesomely killed by a mysterious stranger wearing a white mask. A panic breaks out in the town, as the killer continues to target more and more people, displaying an affinity for horror movie tropes in staging his murders. Sidney Prescott (Neve Campbell), who is still reeling from the death of her mother a year before, becomes the killer's primary target as "Ghostface" slowly wipes out her friends one by one. Meanwhile reporter Gale Weathers (Courteney Cox) investigates the killings with deputy sheriff Dewey Riley (David Arquette), convinced that the deaths are linked to Sidney's past.