Our Slashers Are Different 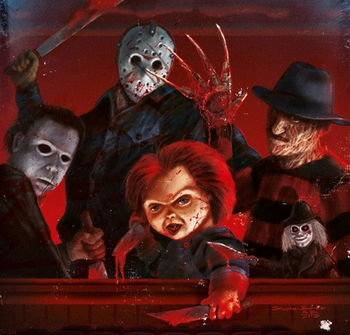 Sub-Trope of Our Monsters Are Different. This one deals with the Near-indestructible Serial Killers stalking teenagers, college students, or the people around a Final Girl. Even ridiculously cute critters arent't immune! This is further elaborated on in the Slasher Movie trope.

Slashers are not traditionally thought of as a kind of monster, though many of them display supernatural powers. Most of them are motivated by some sort of Revenge based motivation, are Made of Iron, and stalk the young. If there's a sequel, they usually possess some form of Resurrective Immortality.

The majority of slashers never receive any sort of explanation for the source of their powers. While Freddy Krueger is a ghost, Jason Voorhees is simply a deformed serial killer living in the woods before he suddenly becomes an unkillable zombie. The origins of their powers are less important than what they do with these powers, which is kill. However, slasher franchises that run long enough often do Retcon an explanation to the source of the killer's powers if there wasn't one before (Halloween, Nightmare on Elm Street, Friday the 13th).

Despite this, some works of fiction have actually made it so slashers are their own distinct type of monster. They apply rules, a commonality of origin, or a category to their activities that does not normally apply to fiction. It also implies that there are many slashers in existence and not just a single unpleasant monster stalking the teenagers of whatever city they're in. Some of them expand on the supernatural elements while others do away with them entirely, revealing them to just be a "Scooby-Doo" Hoax.

This trope is about works that take time to get into the worldbuilding of their slasher villains and how they might or might not be dealt with. This is primarily a nostalgia-based look back onto the original slasher movies and attempting to apply some logic to something that didn't previously possess it (or need to).