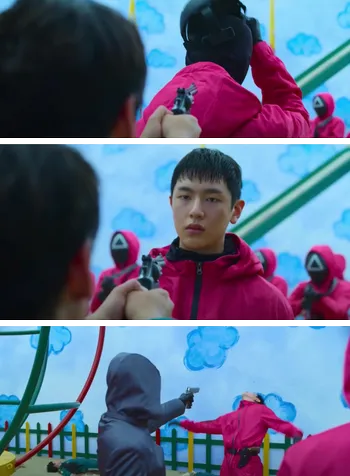 "Remember: once they find out who you are, you die."
Anakin Skywalker: Luke, help me take this mask off.
Luke Skywalker: But you'll die!
Anakin: Nothing can stop that now. Just for once, let me look on you with my own eyes.
— Return of the Jedi
Advertisement:

There's a tendency for masked characters in fictions to only be unveiled in their final moments. This can occur either in the moments leading up to their death, or it can be a post-mortem unmasking immediately afterwards.

Reasons for this vary across depictions, though the most popular involves a last-minute dramatic reveal of the character's identity. However, it can also be used in Dying as Yourself, if a mask plays a notable role in their assumed identity. It can even be used as a cause of death if the victim is somehow dependent on their mask... and on rare occasions, it can be all of the above.

A rare variant on this trope inverts the usual features: here, the the masked character is unharmed - but is instead unmasked for the benefit of another dying character.

Whatever the case, a character is dying or dead, and it's time for the mask to come off.

Compare This Was His True Form for a shapeshifter's true identity being revealed at death.

BEWARE: As this is a Death Trope, unmarked spoilers follow, both for deaths and possible secret identities. You Have Been Warned!

With her entire species being rendered extinct in a war she couldn't stop, Tali removes her mask and dives backwards off a cliff to her death.

With her entire species being rendered extinct in a war she couldn't stop, Tali removes her mask and dives backwards off a cliff to her death.