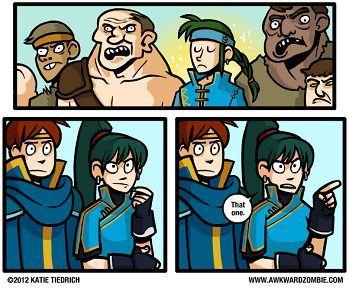 Lyn plays "Spot the Good Guy."
"If she were good, she wouldn't be so ugly."
— Jake the Dog, Adventure Time, "To Cut a Woman's Hair"
Advertisement:

Or to put it another way, every hero worth his salt must be physically attractive, or at the very least, better-looking than half of other people his or her age. This standard is more relaxed for side characters who can be truly ordinary-looking or even literal aliens, but expect the lead character to be pleasing to look at, even if he is the alien.

It almost goes without saying that this is very old; Ancient Greece codified it with the concept of "cosmos" (from which we get the term cosmetics), and an attempt was even made in the 19th Century to quantify this attitude into the "science" of physiognomy, which posited a direct correlation between appearance and moral character.

This trope's influence is felt on many others:

The failed subversion of Suetiful All Along is common.

For animals and more nonhuman characters, see What Measure Is a Non-Cute?.

As this trope is ubiquitous, please only add egregious cases. Invoked and defied examples are the best ones.

Then again this is Usagi we're talking about, who is kind of shallow at this stage of the story (if we're being honest) but still an All-Loving Hero nonetheless.