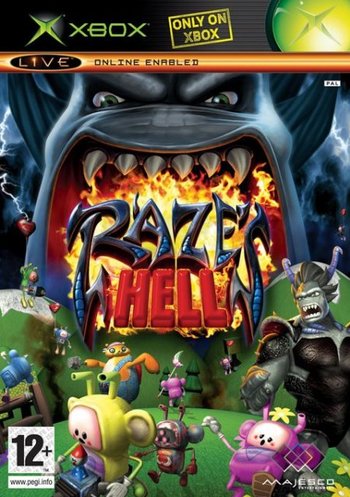 A Third-Person Shooter for the original Xbox that suffered from poor sales due to its odd concept and high difficulty. The game stars Raze, a strange alien whose home is invaded by the Kewletts; vile, pink teddy bear-like genocidal maniacs who seek to cutify the world by destroying all the ugly. Cutify in this case of course means disposing, destroying, or otherwise removing anything that can't be held up to their high standards. Raze returned to his village to find it under attack from the Kewletts and flees for his life. He stumbles upon a convenient ancient relic in a nearby cave. The relic was guarded by Slivh, who tells Raze that his newfound powers will allow him to take revenge. Being fairly pissed off that his whole village was wiped out by these horrible things, Raze goes on a massive murdering spree, hunting the Kewletts down one by one. As the name would imply, this is NOT a game for children. Murder, blood, gore, foul language, and rainbows saturate every square inch of this strange title... and most masochistic players will love every minute of it.

Tropes that apply to Raze's Hell: