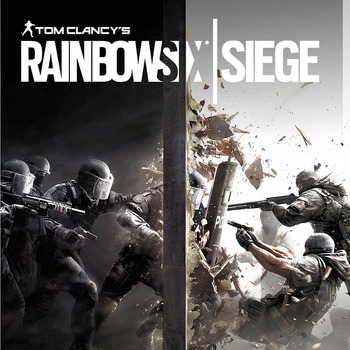 Dynamic Entry: The Game
"Rainbow needs people who will challenge the future of the unit, and...and those who remind it of its roots. It needs people who can be the scalpel and the hammer."
— Harishva “Harry” Pandey
Advertisement:

Unlike earlier Rainbow Six games, Siege is a multiplayer-focused competitive shooter, though it retains the military theme and contains many realistic elements. New mechanics introduced in Siege include destructible environments, allowing players to both breach walls, doors, floors and windows to create new lines of sight and shooting angles. Siege also adds the Operator system, where players would select individual classes, known as "Operators", each with their own special gadgets and weapons.

The game is set years after the events of Rainbow Six: Vegas 2 when the Rainbow program is reactivated by a new leader simply known as Six to face a mysterious new terrorist force called The White Masks.

Players play as Rainbow team operatives recruited from around the world going through exercises to prepare them for combating the White Masks, training to perform hostage rescue and bomb disposal. After completing the exercises, the operatives are called into Bartlett University to stop a bio-chemical attack launched by the White Masks and eliminate their presence at the university.

The storyline ends right after that, and the game moves the player on to the more interesting multiplayer, the mainstay of the game.

In addition, there is the Tactical Realism variation of the standard multiplayer modes which was added with the release of the Operation Skull Rain DLC. Tactical Realism removes some of the unrealistic elements such as One Bullet Clips (magazines are now properly tracked as in the original trilogy of games), most of the Heads-Up Display, and the abilities to mark opponents or see the outlines of teammates through walls.

The game has received free seasonal DLC updates after release, about once every three months or so.

There have also been several themed special events featuring temporary game modes that complement the standard multiplayer along with themed cosmetics.

The Outbreak Event was added in Year 3 Operation Chimera, a radical Tone Shift from the rest of the game and the series. In New Mexico, a mysterious, Soviet-era space capsule falls in the town of Truth or Consequences. A few days later, a mysterious viral outbreak infects much of the town, with the infected people having their bodies mutate in strange, gruesome ways. A week later, the National Guard has placed the town on quarantine, as humans infected by the virus, now dubbed the "Chimera Virus", mutate into hostile monstrous beings dubbed "Roaches". Team Rainbow is assembled to discover the truth behind the outbreak.

A limited-time Wild West-themed event called Showdown was playable from July 2, 2019 to July 16, 2019. Players take the role of three man teams, either The Law (the Attackers) and the Graveltop Gang (the Defenders) on a small outdoor map called Fort Truth. Operators had their loadout replaced with BOSG.12.2 shotgun and the LFP586 revolver with most of the HUD removed.

A tie-in event for Money Heist ran 21-25 November, 2019. The event features a special hostage mode and cosmetic items based on the series iconic red outfit and Dali mask.

The Grand Larceny, another limited time event themed around The Roaring '20s, was run through May 5th to May 19th 2020. Set in a modified version of old Hereford, the event centers around the Attackers looking to secure three safes from the Blighters (the Defenders). Notably, this resurrected Hereford features the fully destructible floors Dummied Out from the game's initial reveal, and it is only emphasized with a focus on shotguns.

Available from August 4th to August 24th, 2020, M.U.T.E. Protocol takes place on a retrofuturistic version of Tower. Attackers are tasked with securing two out of three servers from the Defenders with no drone phase — the Attackers ARE the drones! Attackers dematerialize when they enter their drones and rematerialize where their drones were when they exit. Defenders can use a network of bulletproof cameras to teleport around the map and can add to the network with their own cameras.

From October 27th to November 10th, 2020, Sugar Fright was a Halloween event set in Frost's candy-fuelled fever dream. In a radical departure from normal gameplay, the gamemode, called Sweet Hunt, features a respawn mechanic and is more symmetrical. The Tricksters (Attackers) and Treaters (Defenders) are equipped with the same loadouts and tasked with the same objective: secure sweets dropped from enemies they kill while denying the same from their opponents. Whoever reaches fifty or has the most at the end of ten minutes wins. The map, Neighborhood, is candy-themed and features no destructible walls or barricades and mostly takes place outside, with no detection for defenders.

Since 2019, this playlist has been active every January to Febuary to promote the Six Invitational esports event. In 2019, the playlist consisted of the seven maps in the esports map pool with Unranked gameplay rules, and gave out promotional cosmetics in special packs acquired through purchase or completing challenges.

The S.I. 2020 playlist kept the same rules but instead moved to a new map called Stadium, combining elements of Oregon and old Hereford while introducing a new material: bulletproof glass. All operators are available, even the ones players do not own. Cosmetics have been moved to a 35-tier battlepass. In addition, the playlist is accompanied by the CGI cinematic "Tournament of Champions," a public training exercise intended to test Rainbow on everything they had learned in Harry's "Program."

The S.I. 2021 playlist contains much of the same, but this time Stadium has been reconfigured to be a combination of Border and Coastline. Cosmetics are tied to a 100-tier battlepass available since the beginning of Operation Neon Dawn. Included with the event is the cinematic "The Playbook."

For the 2022 Invitational, both maps are available, but with slight tweaks for playability. Included with the event is the "Sisters in Arms" cinematic, exploring Zofia and Ela's relationship and revealing that after the invitational, Ela, along with several other operators, left Rainbow for NIGHTHAVEN.

From May 4th to May 18th, 2021, the Apocalypse event takes place in a Mad Max-inspired version of Outback. The attacking Warband wants to steal the last plant on Earth from the Keepers, who are able to pick up the plant and move it around the map. To help the attackers, there is no prep-phase or reinforcing and the Attackers can secure rooms; any Defender that steps into them will be pinged.

Available from August 3 to August 24, 2021, Containment is a tie in with Extraction taking place in a corrupted version of Consulate at night. Attackers have to find and destroy two minor Prothean nests before destroying the main one and Defenders have to protect them ... without guns. Defenders have massively increased health, Oryx's mobility, Aruni's punch and their Quick Melee are still instant kills.

Available from December 14, 2021 to January 4, 2022, Snow Brawl is a symmetric Capture-the-Flag gamemode taking place in a Christmas-themed version of Chalet. Attackers and Defenders, the Orange Blizzards and the Blue Blades, respectively, are armed with snowballs and a snowblast launcher that knocks players off their feet and can respawn. Boosts to fire rate, running speed, snowblast ammo, and health can also be found on the map and picked up.

A Samurai-themed event available from April 26 to May 17, 2022, Rengoku is a symmetric Domination-style gamemode on a slightly modified Skyscraper. Attackers and Defenders, the Devoted and the Possessed, fight over a trio of objectives that rotate around the map and gain points depending on how many they control. Whoever reaches 300 points or the most after 10 minutes wins. All operators have increased health and speed, can jump up hatches, and are equipped with shotguns and kunai with a variety of special effects.

A co-op Spinoff game called Rainbow Six Quarantine was announced at E3 2019, and was released under the title of Rainbow Six Extraction on January 20, 2022.