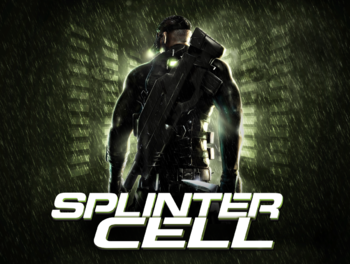 Sent where no one else can go
to do what no one else can do
"You have the right to freedom of speech. Freedom of worship. From want. From fear. These rights would not exist without a fifth. The right to protect all other freedoms, by whatever means necessary. It's my freedom. It's my duty. It is my war."
Advertisement:

The protagonist is Sam Fisher, a former Navy SEAL who is being brought out of retirement by his old commander, Irving Lambert, to take part in a new NSA initiative called Third Echelon. Third Echelon is a black-ops program involving the insertion of a single operative — Sam — into sensitive, high-security situations to gather intel and, where necessary, neutralize targets, all without being seen or heard. To that end the players have to navigate creatively, time their movements with extreme caution and patience, and make use of Sam's high-tech gadgets, most notably his black tactical suit and trademark headset, which provides night vision and thermal vision, and his light meter, which allows the player to use light and shadow to utmost advantage.

To date, the series consists of:

Due to the sudden Genre Shift of the series, Conviction naturally resulted in a Broken Base, with numerous fans crying that the series had become another generic shooter and was irrevocably ruined. Of course, things weren't helped when Michael Ironside, the voice of Sam who openly liked ''Splinter Cell'' for being a different, non-actiony series, promptly left the role at the time of Blacklist, due to having been diagnosed with cancer and choosing to take time away from acting to fight it, something he and Ubisoft only revealed years later when a DLC starring Sam and voiced by Ironside was announced for Ghost Recon Wildlands. Despite all of this and the fact that no new installment has been released since 2013, the series still has a strong following, and while it has changed significantly in gameplay, it maintains its defining themes and individuality, and stays the same at heart. A remake of the first game has been announced in December 2021.

There are also some spinoff novels that take the series in a different direction from the games.

Due to its high popularity, the original trilogy is available as an HD re-release available on PSN, and all of the main games (including both versions of Double Agent) are backwards compatible on the Xbox One. The main games (with the notable exception of Pandora Tomorrow) are available digitally on PC from the Ubisoft Connect and Steam platforms.

In July 2020, Ubisoft and Netflix announced they are working on an adaptation in anime series form.

open/close all folders
Tropes common to both versions