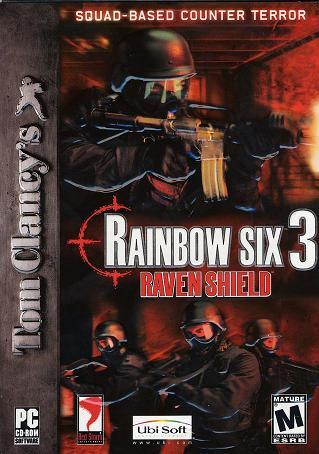 Rainbow enters when everybody else fails.
Advertisement:

Rainbow Six 3 is the third installment of the Tom Clancy-branded Rainbow Six franchise, released in 2003 for the PC, Xbox, PlayStation 2 and GameCube.

The story is set in 2005 when a heavily-armed Neo-Nazi terrorist group begins to terrorize South America and Europe, leading to the deployment of the elite Rainbow anti-terrorist response team to deal with them and those secretly supporting them.

The PC version, subtitled Raven Shield, is a direct sequel to Rainbow Six: Rogue Spear, keeping the emphasis on mission planning, coordination and careful play, with missions having multiple ways to complete their objectives; graphically is where the game primarily differs, with the presentation upgraded to (then-)modern expectations by way of Unreal Engine 2. Two expansions followed over the next two years, respectively the retail Athena Sword and then the freely-downloadable Iron Wrath; both add several new weapons and new seven-mission-long campaigns - Athena Sword dealing with a terrorist cell, still in contact with an incarcerated bad guy from the original game, launching attacks in Italy while attempting to gather chemical weapons, Iron Wrath involving a different terrorist group kidnapping Bulgarian scientists and attempting to construct nuclear weapons - with the latter also adding revised versions of three missions from previous games (respectively the first game's "Cold Thunder", Rogue Spear: Urban Operations' "Iron Comet", and Eagle Watch's "Little Wing").

The console version, simply titled Rainbow Six 3, removes mission planning, multiple Rainbow teams and the complex level designs in favor of linear levels that still encourage some careful play. The story is set in South America and Europe when Venezuela's anti-US president masterminds a scheme to undermine Saudi Arabia in an attempt to control the oil market using various terrorists cells across the world while Rainbow is deployed to stop their plans. While compared to the PC version it seemed rather cut-down, it nevertheless became popular enough, especially for online play, that a Mission-Pack Sequel was released the following year. Subtitled Black Arrow, it expanded the multiplayer features (including two new modes) while coming with a new campaign involving a terrorist group, funded by oil bankers and Russian military officers, attempting to create weapons of mass destruction and force the creation of a new country in the Caucasus.

A spin-off (technically a sequel for the consoles' version) subtitled Lockdown was released in 2005 for the Xbox, PlayStation 2 and Nintendo GameCube and for PC in 2006.

Note: Most, if not all of the tropes listed here are for the PC version.