Video Game / Ready or Not 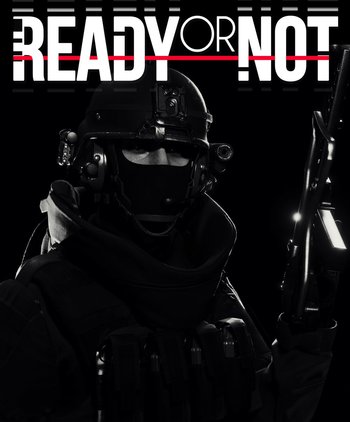 Special Weapons and Tactics
Ready Or Not (or RoN for short) is an upcoming Co-Op Multiplayer First-Person Shooter by VOID Interactive. The players control a SWAT team doing typical crackdowns on crime, as a Spiritual Successor to the S.W.A.T. series, most notably the fourth installment.
Advertisement:

The game was revealed on May 3, 2017 with a teaser trailer, and a gameplay trailer

was released on March 7, 2019. It has also been promoted with an Alternate Reality Game named Carcosa ARG; you can watch its summary here

. The game has been released in Early Access in December 2021.

It is unrelated to the Ready or Not (2019) film, the sequel to All-American Girl Young Adult novel, or the Canadian TV series from the 90s.