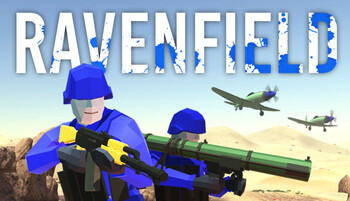 Ravenfield is an indie team-based First-Person Shooter by independent Swedish programmer Johan Hassel, who also goes by Steel Raven 7 online. It is currently in Early Access. The game itself replicates the Battlefield series' style of gameplay with massive first-person combat on a large regional map, vehicular combat, squad commands, and control point + queue based scoring.
Advertisement:

However, unlike Battlefield, the game is entirely in single-player, and instead of the linear campaign introduced from Bad Company onwards, Ravenfield focuses on a fully customizable faux-multiplayer experience and high support for Game Mods supported by Steam Workshop. The warring armies are (by default) bright red and blue armies reminiscent of the Army Men series.