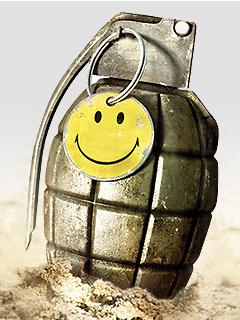 "I belong to Bad Company. I don't wanna end up in some good company!"
—Haggard
Advertisement:

The Battlefield: Bad Company spinoff subseries... thing represents something of a departure from the norm for the Battlefield series. Both games bring a whole new feature to improve the Battlefield experience: plot! And destruction physics, but we’ll get to that later.

Set 20 Minutes into the Future, Battlefield: Bad Company, the first game in the series, follows the exploits of B(ad) Company, a group made up of the military’s rejects and trouble cases that are sent on Suicide Missions in lieu of better trained (read: more expensive) soldiers. Things get a bit more interesting when B Company stumbles across a dead mercenary bearing the logo of The Legionnaire, a famed commander known for paying his mercenaries in gold bars. Being upstanding soldiers, they of course report this immediately to their superiors. Bad Company’s campaign is a somewhat light hearted story for what has traditionally been a gritty genre. Highlights include accidentally invading a neutral country and driving around on its golf courses while dodging tank fire.

Bad Company 1 is also notable for introducing destruction physics to the series. Its engine, Frostbite, allows for everything from fences to the outer walls of buildings to be destroyed, meaning that cover no longer means safety.

Battlefield: Bad Company 2 continues following B Company through a Darker and Edgier storyline that might feel a bit familiar to Call of Duty fans. B Company has been promoted from glorified Cannon Fodder to cannon fodder that gets things done. The squad is tasked with stopping a Russian plot to obtain a secret WWII-era Japanese superweapon. Of course, not everything goes according to plan, and things start to get a little out of hand.

Bad Company 2 upgrades its engine to Frostbite 1.5, allowing for much more intricate destruction physics. Now, instead of just blowing out a building’s walls, it’s possible to destroy smaller buildings entirely, leaving them to collapse on anyone unlucky enough to be inside. Some bits of cover can even be shot to pieces, with chucks of concrete breaking away to reveal enemies behind.

Of course, this still being Battlefield, both games feature a hefty multiplayer component. Multiplayer in both games is on a somewhat smaller (though still large) scale than the main Battlefield games, with a somewhat reduced vehicle focus (no jets being one large change). This, combined with some other changes such as Regenerating Health and no prone have lead to accusations by some of the series’s more hardcore fans that DICE was pandering to console gamers. Still, critical response has generally been good and Bad Company 2 still has a thriving community even after GameSpy's servers, which handled the multiplayer of every Battlefield game up to this one, were shut down. Oh, and destruction physics extend to the multiplayer of both games, leading to a very dynamic battlefield.

Bad Company 2 got a full-fledged multiplayer Expansion Pack, Battlefield: Bad Company 2: Vietnam, which is set in Vietnam. Included with the pack are five new maps and a slew of new period weapons and vehicles. And Flamethrowers.

In October 2012, Fox announced that they were planning on airing a television adaptation of Bad Company. It was to be an hour long action-comedy series featuring the game's main characters but ended in Development Hell and with Disney's acquisition of 20th Century Fox in 2018, we can assume that the series is dead and done.

Not to be confused with the arena rock band Bad Company, or the 2000 AD strip Bad Company.