Our Weapons Will Be Boxy in the Future 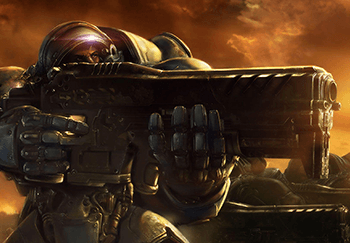 XBOX HUEG.
Welcome to the future. It may come used or perhaps come standard with shiny towers and crystals, but, when it comes to warfare, there's one very good indication that your Space Marines aren't just Super Soldiers with assault rifles: they will instead wield something not unlike a large metallic brick.
Advertisement:

Put simply, Our Weapons Will Be Boxy in the Future is the tendency for more "advanced" weapons in near-future and Sci-Fi to be Handwaved as "more advanced" or made of exotic, lightweight materials and yet be large, clumsy, rectangular, boxy things much larger than modern-day arms. This is probably based on the fact that many modern weapons use molded plastics with rounded rectangular shapes and smooth curves. At the most exaggerated extent in fiction, guns resemble rectangular prisms and melee weapons tend towards square profiles and right angles.

The most recognizable of modern compact weapons (FN P90, H&K G11, Glock in general) were given final form during The '80s, when boxy, plasticky shapes and textures were the norm in industrial design, so they may look a bit Zeerusty by the present day.

Often used in videogames, since boxy shapes have a lower polygon count and are thus particularly easy to render.

On the Sliding Scale of Shiny Versus Gritty, this trope tends towards the latter, as this trope's association with The '80s brings to mind many famous works of dystopian cyberpunk fiction. However, there are exceptions. "Enlightened" civilizations may still keep their boxy arms around as a symbol of older times or as a realist answer of how they keep the peace. If the Enlightened civilization has an active military, expect these Space Elves to use vaguely iPod-shaped weapons.

Depending on how effective these weapons are in their respective setting, they may also be Cool Guns.

Production design note: a lot of the futuristic weapon props that are actually fired on-screen are by necessity real world guns put in plastic shells. This might go a long way to explain the origins of the trope.

See also Cassette Futurism, Kinetic Weapons Are Just Better and High-Tech Hexagons. When you apply this trope to spacecraft, the result is the ISO Standard Human Spaceship.