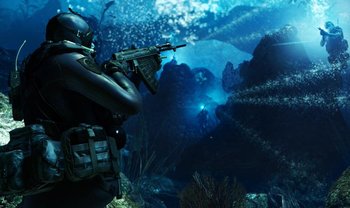 In fiction, guns can be practically drowned in water and still fire accurately, if not a little worse for wear. It doesn't matter who's holding the gun — The Hero or the Big Bad, they can still fire completely accurately, despite the fact that Guns Do Not Work That Way.
Advertisement:

In Real Life, this trope can vary. Most guns will jam or misfire when people discharge them underwater. It's not the gun itself that is affected (well, not for the first time, anyway) — it's the ammunition itself. Even if the gun is somewhat water-resistant (and that's a big somewhat, given that the barrel of a gun is essentially a giant hole), the primer of the ammunition is not. Besides the possibility of the primer being waterlogged, the gun's inner workings could also end up corroded by the water, and attempting to fire a corroded gun is a Very Bad Idea.

A gun may work one or two times when fired underwater, but in the long run, water will seep into the gun or wet the crucial parts of it, making it completely useless. And then there's the actual water pressure itself, which means the bullet won't go very far.

However, there are some Rare Guns that have been designed to work underwater. These include the Heckler and Koch P11 pistol and the APS Underwater Assault Rifle.

Also a case of Do Not Try This at Home, because guns are not intended to be fired underwater. Shooting a gun filled with water or wet ammunition is probably not going to end well for you or anyone around you. And shooting a gun underwater with air in its barrel is even worse, because the gun can explode.

Subtrope of Water Is Air, because the bullets will still work fine — though they just won't travel very far. Spearguns designed for fishing underwater are also common in the hands of divers and underwater Mooks.