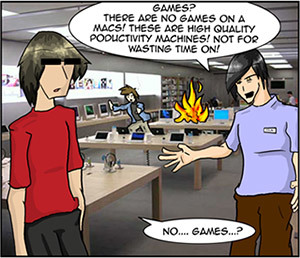 and use them as a background. These images are usually run through a filter (almost always some type of blur) on Photoshop, either to lessen focus or to make the image more congruent with the art style. This is often utilized for complex designs (book and video game covers are common examples), but can be seen as a sign of laziness if the artist comes to depend on it.

In some cases, the artist is lazy enough that he picks the first fitting image from the first results page, thus allowing bored fans to guess their search query and find the original images easily. Laziness and ignorance can also get authors in much more serious trouble — for some reason, people tend to think that anything found via GIS is fair game, when of course it's still all covered by copyright law.

No relation to Geographic Information Systems

, which aren't used by artists nearly as much, unless artists want to create their own real-world modern-day maps.

Not to be confused with a Photo Comic, which uses photographs as the art instead of an embellishment. See also Real-Place Background. Contrast Matte Shot, where real people stand in front of a painted background. Compare Traced Artwork, when a creator copies existing art by hand.