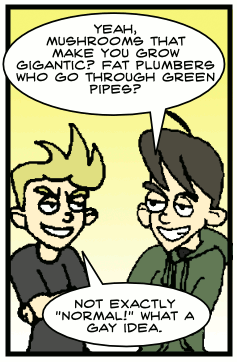 Hope you like those poses. And those shit-eating grins. Because you're going to be seeing them a lot.
Advertisement:

is a Two Gamers on a Couch webcomic detailing the awesome adventures of the uber PS3/360 gamers, Shadow and Chug.

Powerup Comics is the half-baked product of two man-child PS3/360 fanboys. The protagonists are a pair of Marty Stu self-inserts who talk big about their gaming prowess, but spend most of the comic getting into inane adventures that are only tangentially (at best) connected to video games. And this excuse for a plot often gets tossed to the side so the authors can soapbox their uninformed opinions on whatever topics happens to have grabbed their interest that week. The artwork consists of, at most, two poses for every character (which are then abusively copied and pasted), and the punchlines are either nonexistent, or consist of Shadow shooting whoever he happens to disagree with.

Wait, no, that’s not it either.

Powerup Comics is an elaborate prank in webcomic form. Chad “Shadow” Wilson and Jason “Chug” Krydenski, the alleged author and artist, are just as fictional as the webcomic they created. In reality, the comic was conceived by Eli Parker, and created with plenty of input from other members of the Truth & Beauty Bombs forum (at the time, the home of the Dinosaur Comics fandom). The entire point was to create a So Unfunny, It's Funny Stealth Parody of Two Gamers on a Couch webcomics in general, and of Ctrl+Alt+Del in particular—thus, all the aforementioned flaws were completely deliberate on the creators’ parts. Whether or not they succeeded too well in making a bad webcomic is left for the reader to determine.

A secondary goal of Powerup’s creators was to troll The Duck (back when it was known as Drunk Duck). Reasoning that the only thing more infuriating than bad art was inexplicably popular bad art, T&BB members created accounts on the site solely to pose as Powerup fans. Their ensuing arguments with Duck users who weren’t in on the joke brought Powerup enough page views to propel it to a spot on the Duck’s automatically-generated Top Ten list.

A few years after Powerup’s inception, participation from Truth & Beauty Bombs dried up, so Parker continued the comic solo. He also worked Chad and Jason (the authors, not the Marty Stus) into his main comic series, Unwinder's Tall Comics, as minor recurring characters.

Eventually, Jason left for college, forcing Chad to bring Powerup Comics to an end, though he insisted that it was just a temporary hiatus until a new artist could be found. Over a year later, Chad found his artist—Amy Sauce, another Tall Comics character—and relaunched the comic with almost none of the old characters, and a painfully hip art style that clashed just a little bit with the writing.

After a whopping 5 strips by Amy, the new duo encountered "creative differences" (Chad didn't like that "she kind of made Shadow look gay") and the comic entered another year-and-a-half long hiatus. The comic was then re-resurrected with another new artist, Draz (a self insert/parody of artist Kimball Anderson, T&BB member), who drew the comic as a series of mostly uncoloured digital pencil sketches. During this time, Jason returned to visit Chad, met Draz, and "revealed" that he didn't put much effort into the comic when he was the artist. Meanwhile, Chad became increasingly frustrated with Draz's tendency to make confusing additions to the planned story without asking, and eventually they decided to once again stop making Powerup.

Following the latest hiatus, the comic has abruptly returned with no explanation as to what has happened to the characters in the intervening time, with Jason returning as the comic's artist using the exact same copy-pasted art from the original iteration of the comic.