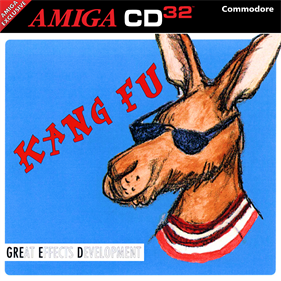 Kang Fu is the only video game developed and published by GREat Effects Development (GREED for short), released in 1996 for Amiga systems. It's a Platform Game in which you control a kangaroo named Klont who has to save little kangaroos from the bad guys across 10 levels.

The official website still exists, but it's so virus-ridden you shouldn't bother searching for it.