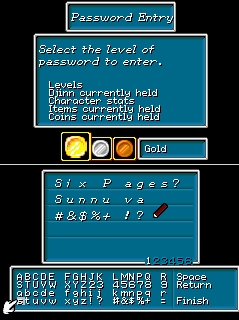 A classic of oldie video games, this is the method of saving your progress in a game without being required to actually store it on the console or game cartridge: Encode it as a string of letters, numbers, or other symbols and have the player write it down on a nearby piece of paper.

These have an advantage of being portable compared to traditional save files — you can take that slip of paper pretty much anywhere (like a friend's house), and input the password to resume the game more or less right where you left off. On the other hand, you have to make absolutely sure you wrote down the password correctly, because messing up a letter here or number there will probably render the entire thing (and whatever game progress it represents) unusable. Thankfully, the advent of digital cameras (especially on cellphones) and screenshots has made it trivial to keep track of passwords.

Back when computer games came on cassette tapes, "multi-load" games that were divided into two or three parts due to memory constraints used passwords in a slightly different way. The first part would give out a password at the end, but the second part then had to be loaded manually. Once the second part was loaded, the password would serve to unlock the full complement of Video-Game Lives.

Also present on some newer console games where the data to be saved was too small (like just a level number) to justify the cost of a battery-backed saving chip or an extra file block in the memory card.

Usually, there are two kinds of passwords:

Many of the more complicated password systems are case-sensitive and also use numbers and symbols. The reason is that 26 lowercase letters, 26 uppercase letters, 10 numerals, and 2 other symbols add up to 64 (two to the sixth power), which means that 6 bits of raw data can be encoded in each symbol. Without lowercase, 32-symbol alphabets (consonants, digits, and a couple symbols) provided 5 bits per symbol. (Japanese games could also use the hiragana and katakana syllabaries, each of which provides 45 symbols.) Though this extra encoding can cause problems in and of itself - depending on the font used in the game, some characters could easily get mistaken for others (Like capital i 'I' vs lowercase L 'l' or the digit '1' or uppercase o 'O' vs the digit '0' - some games avoided this by simply removing characters that can be mistaken for others from the keyboard to prevent confusion), and some players might simply not have good handwriting, resulting in an otherwise accurately recorded password being incorrectly typed when the game is started up again several days later due to a misreading. As games went on it actually became mandatory to remove vowels to prevent kids from entering in vulgarities, as some of these vulgarities were valid passwords that would get shared around the schoolyard, like Metal Gear's infamous, hilariously on-the-nose, and hand-to-God genuinely coincidental FUCKME code that started you at the final boss of Metal Gear with no weapons or items. Compare the US and Japanese versions (left) and European versions (right) of Metal Gear's title screen.