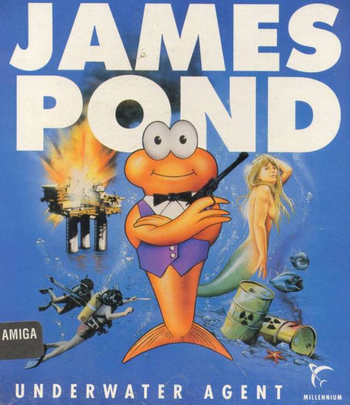 James Pond is a video game series created by the British developer Vectordean Ltd. and has been released on a number of consoles, most notably the Amiga computer and Sega Genesis.
Advertisement:

An obvious spoof of the James Bond franchise, the titular character is an anthropomorphic fish named (surprise) James Pond who is secret-agent Double-Bubble 7 of the organization F.I.5.H. and has a "license to gill" in his battles against the evil J.A.W.S. organization and its leader Dr. Maybe (a spoof on the infamous 007 villain Dr. No). His adventures begin in James Pond: Underwater Agent (1990), in which he defends his watery home and its denizens from polluters and enemy agents. His next adventure, James Pond 2: Codename Robocod (1991) sees Pond wearing robot armor as he sets out to save Santa Claus and his toy workshop, and James Pond 3: Operation Starfi5h (1993) sends Pond into space to save the moon and its cheese supplies from Dr. Maybe in a Super Mario World-like adventure.

James Pond also appears in the spin-off The Aquatic Games, in which he is one of the playable characters in an Olympic-styled sports event. Most recently, Pond has been seen in the 2011 iPhone game James Pond in the Deathly Shallows. A Kickstarter project was announced

in September 2013, but later canceled twelve days before it ended due to underperforming.