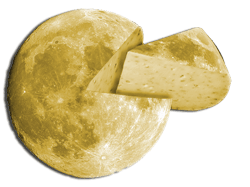 Organic ingredients, naturally aged.note No, that's not Pac-Man.
"They say the moon is made of green cheese!"
"No! It's made of cake, candy, and ice cream!"
— The unnamed lead characters of the Van Beuren Aesop's Fables cartoon "Silvery Moon"

One of the common Moon myths in Western culture is the saying that it is made of "green"note originally meaning "young" cheese. There was never a time when this was in fact a popular belief, though people sometimes talk as if there really was once a mythic culture credulous enough to believe it.

This can manifest in many ways in fiction, often for laughs. For example, the moon may be depicted as made of Cartoon Cheese (possibly even a shade of green), and it may even be inhabited by moon mice (since mice love cheese and all that).

In Video Games, this can overlap with Level Ate as applied to lunar settings.

See also The Man in the Moon, the other common Western folklore about the moon. The closest eastern equivalent would be the Moon Rabbit.

Wallace and Gromit try moon cheese, but can't decide what the taste reminds them of.

Wallace and Gromit try moon cheese, but can't decide what the taste reminds them of.