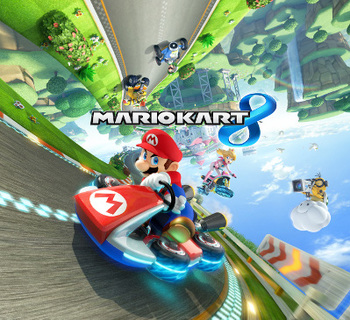 The eighth installment in the Mario Kart console series, available on the Wii U and Nintendo Switch.

Released on the Wii U in May 2014, it is the first game in the series to feature HD graphics, as well as the first one to have orchestrated music. The main gameplay concept of this installment is the addition of anti-gravity, which allows racers to drive on walls or even upside-down. Notably, the game also brings back several features from previous games in the series, such as the vehicle customization and the glider/underwater driving of Mario Kart 7, the motorbikes and 12-character races from Mario Kart Wii, and (in the Deluxe port) the unique Battle Modes that were exclusive to Mario Kart: Double Dash!!.

The game has reconciled unforgiving game elements that recurred throughout the series, such as having Lakitu immediately rescue you when you fall off the course like he once did in Mario Kart: Super Circuit, without going through a place-costing Fade to Black first. There are also less stipulations on getting star ranks (getting Triple Star in a cup in a higher engine class counts for all lower classes too), and several new power-ups, most notably the mighty Super Horn, a counter to the nemesis of all leaders, the Spiny Shell. However, items must be used before the item slot is freed, in contrast to how previous installments empty the item slot when certain items (such as shells and bananas) are dragged behind the kart instead of used immediately, though Deluxe features both Double Item Boxes and adds a second item slot akin to the one previously seen in Double Dash!!. The game also introduced Slow Motion cuts, which can be accessed via Mario Kart TV.

An enhanced port of the game was released in April 2017 for the Nintendo Switch under the name Mario Kart 8 Deluxe. Deluxe not only includes the original game and the DLC additions, but adds new items and racers, including the Inklings, as well as a revamped Battle Mode with actual battle arenas.note "Battle Mode" in the Wii U version used racetracks, instead of purpose-built arenas A June 2018 update for this port later added Nintendo Labo support, while a July 2018 update added a Breath of the Wild Skin for Link, along with the Master Cycle Zero as a bike, a matching set of tires, and a Glider based on the Paraglider.

In the February 2022 Nintendo Direct, it was announced that 48 past courses from across the series from Super Mario Kart up to 7, as well as the mobile game Mario Kart Tour and new tracks, would be added to Mario Kart 8 Deluxe in 6 waves of 8 via a paid Booster Course Pass. That DLC can be purchased either by a permanent one-time purchase of $24.99 for each DLC pack to be added one at a time or be part of the Nintendo Online Expansion Pack for free, but only as a temporary addition under that method.

The remade version of Ribbon Road from Super Circuit is now set on a toy racetrack inside a giant bedroom. Footage from BluRacer7 on YouTube.

The remade version of Ribbon Road from Super Circuit is now set on a toy racetrack inside a giant bedroom. Footage from BluRacer7 on YouTube.