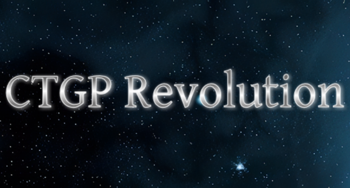 Possibly the most famous and ambitious mod pack on the Wii bar none; CTGP Revolution

that are not present in the original copy of Mario Kart Wii.

Released as a sequel to the Riivolution-based CTGP pack, it is complete with custom game modes. It contains the aforementioned custom tracks, and the ability to play online and LAN via Wimmfi, a custom server to connect to other Wii consoles, even after Nintendo's WFC shut down. It comes with the "Ignorance is Bliss" anti-cheat, to prevent online cheaters, and for the same reasoning, the mod is also not open source, although CTGP-R's predecessor is.

account (officially endorsed by the makers, ran by a fan). Bean and Chadderz frequently stream CTGP updates and gameplay on Twitch too

Tropes specific to the base game are best left on that page.