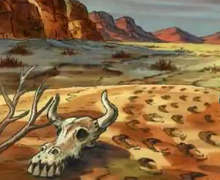 Whenever a show features or references a desert, savannah or other barren land, odds are good that a bovine cranium will be involved to set the mood. As is often the case, the rest of the skeleton goes unseen.