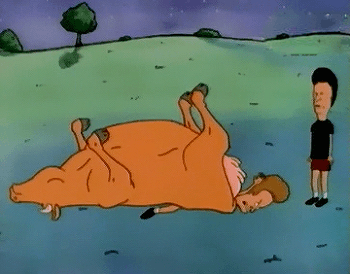 People (usually those afflicted by Small Town Boredom) will sneak out at night and try to tip a cow over, because as you all know cows sleep upright and are too dumb or weak to do anything about people pushing them over. When they finally fall they will just lie on the ground helpless until someone gets them back on their feet. Right?

Actually no. In Real Life this is downright impossible, because:

A subtrope of Artistic License – Biology and a popular Urban Legend (you see, there's a reason why it is called an urban legend and not a rural one). See also Constantly Lactating Cow for another trope about cattle being portrayed inaccurately.